24 Better Questions to Ask Kids About How Their Day Went 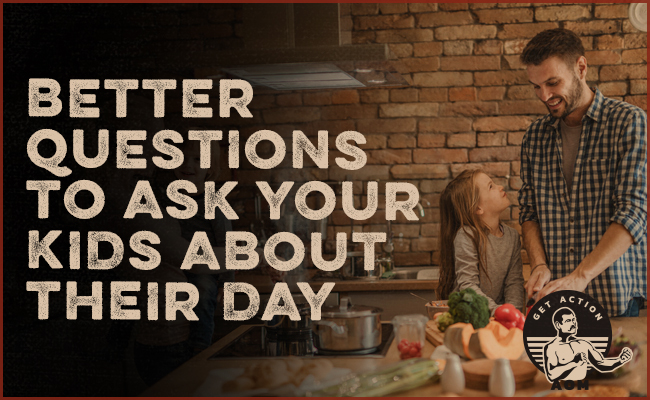 It used to be that when my kids would come home from school, I’d ask them the two questions parents have been asking their children since the dawn of mandatory education:

“What did you do in school today?”

“How was your day today?”

Their answers to these queries were as invariable as the rising and setting of the sun: “Nothing” and “Good.”

I was bugged by those content-less replies, but I don’t know why I expected anything different. After all, that’s what I told my mom when I was a lad and she asked me what I’d been up to.

I really do want to know what’s going on in my kids’ lives and what they’re learning at school; I’d like to have slightly more expansive conversations with them. So I figured there had to be a better way to get them to open up when we’re hanging out at the end of the day. And indeed, there is.

Don’t barrage them with questions right away. Think back to when you were a kid and your parents hit you with a ton of questions about school as soon as you walked through the door.

You just wanted to decompress and play some SNES while eating a Dunkaroo rather than getting the third degree about your day.

Well, your kid probably feels the same way. So give her some time to relax a little instead of going into “How was your day?” questions as soon as she gets home from school.

Of course, if you don’t work from home like me, you probably won’t see your kids until you’re done with your day at the office. In that case, dinnertime will be a good chance to catch up on how your children’s day went. (Here are some more tips for getting the most out of family meals.)

Keep it open ended. Don’t only ask “closed” yes or no questions, which have a tendency to shut down the conversation. Instead, ask more open-ended questions that elicit more expansive answers; these usually begin with What, How, and Why.

You’d want to karate chop them in the throat. Most of what you do at work is boring and repetitive, and not something you want to recount to someone else.

Well, your kid feels the same way about school. So don’t ask for a blow-by-blow rundown of his day because it usually doesn’t change all that much. Instead, focus your questions on anomalies he experienced that day (suggestions on that below).

Try again later if they’re not engaging. If, despite your best efforts, your kids aren’t engaging in conversation, abort mission and try again later. They probably don’t want to talk right then, but maybe they’ll want to later.

Better Questions to Ask Your Kids About How Their Day Went

Below is a list of questions that I’ve experimented with and gotten good mileage from when asking my kids about their school day. I’ve found that focusing questions on anomalies elicits the most response; it’s that kind of stuff that sticks out in their memory and that they enjoy recounting. So ask your kids questions about weird, funny, awkward, or unique moments that happened during their day.

The post 24 Better Questions to Ask Kids About How Their Day Went appeared first on The Art of Manliness.

Understanding (And Countering) The Cost of Downtime

How to Get A Short-Term Business Loan